why do you celebrate?

Yesterday at church, our pastor taught from the passage in Luke 19 about when Jesus came into Jerusalem on a donkey the week before He was crucified on the cross. That's because yesterday was a Christian holiday called "Palm Sunday". On this day in history, Jesus rode into town and the people laid down their coats and waived palm branches as a form of honorable welcome for Him.

I have heard the story many times, and I just figured it was a nice account of a time when believers welcomed their Savior with honor... but apparently it was not exactly what I thought.

Apparently the people in the town were mostly just glad that Jesus was coming for the reasons they wanted Him to come: to destroy their enemies, advocate for their political side, and generally be a dominating leader who would get them what they wanted (which they thought were 'righteous' wants, as humans tend to do).

They were not standing in awe that the Lord would come down in the form of Jesus and save their own confused, hateful, prideful, impatient souls. They were just glad to have a supposedly powerful ruler who seemed like he would fight against the "bad people". 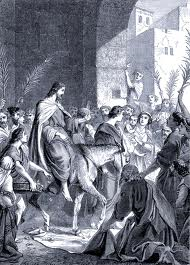 I had to stop a minute and think about the number of times I have only been 'joyful in the Lord' when things are more or less 'going well' in a season of life.

I had to stop a minute and think about the number of times I have thought about the "bad people" in the world, and how much they needed to get what they deserve. (I'm ashamed)

The truth is, I deserve to get the worst of the worst. Fortunately, I had people in my life who love me, tell me about what Jesus truly came for, which is to save sinners like me. To give grace to those who do NOT deserve it. To give life to the lifeless. To offer peace for people who are restless. It's the opposite of how we naturally think the world works. That's grace.