Welp, my kid rolled over for the first time last night.

We have been expecting this milestone because my little one recently started showing signs that he was about to do it. Naturally we had our camera phones out each night recording every non-success in an attempt to catch the big moment. Naturally when it finally happened we did not have our phones nearby to capture his accomplishment.

It was not like I expected. We waited and waited for him to make one smooth move from back to belly.. Ta-da!! But in reality, we sat around cheering him on, watching him grunt and push and scoot, and saying encouraging words to him like he was about to break some world record, but to no avail.

When he actually did it, he was working silently on the floor and he sort of just flomped from his back to his side (like he had done a thousand times before), then eventually figured out he could keep going and rolled over onto his right arm. It was stuck.. So we waited until he wriggled it out from under himself to officially "claim" the victory. Yay!!! 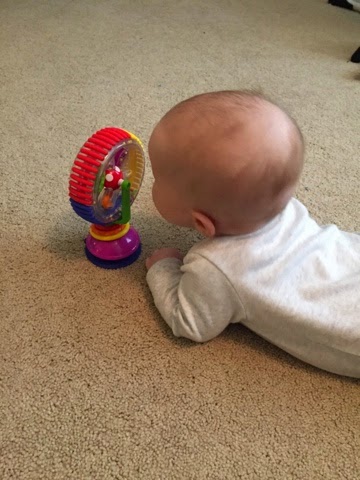 [okay, okay, nobody cares. I'm getting to my point]

We celebrated him with everything we had. It was a sweet moment of praise for this little human in his little moment of accomplishment. What joy! It's silly, but it got me to thinking about how to translate that attitude to other areas of my life.

To watch Harrison's face light up while we hugged and kissed on him in a celebratory fashion was a moment for me. We all like to be celebrated, even for the small things. There is so much competition out there, so much comparison. How can I do my part to truly "get there" with someone and genuinely celebrate little accomplishments in life as though they were the greatest?

It could be that your best friend made it throughout the day without having any negative self-talk. Maybe your grandma successfully figured out how to open and use the "instant gram" app on her new iPad you got her for Christmas. Perhaps after many failed attempts your neighbor finally perfected the backspin on his ping pong serve.

It is so often that in moments like these there is opportunity for joy and we run past it cheating both ourselves and others out of a few minutes of life-giving.

So your wife had an extremely successful coupon-savings grocery run?
Tell me all about it! What'd you buy? You saved how much?? That. Is. AWESOME! Way to go! Look at you. Savin' money. You're great!

So your son memorized song lyrics to a fast-paced pop song?
Sing it! Sing it again! I'm so proud of you. That took a lot of practice and dedication! I love it!

These things are so mundane but they are so good. A continual feast.

"All the days of the afflicted are evil, but the cheerful of heart has a continual feast." - Proverbs 15:15